Los Angeles, CA, December 3, 2013 – MPTF announced today that the Sumner M. Redstone Charitable Foundation has made a $20 million gift to the Motion Picture & Television Fund (MPTF) Campaign. Sumner Redstone is Executive Chairman of the Board of both CBS Corporation (NYSE: CBS and CBS.A) and Viacom Inc. (NASDAQ: VIAB and VIA). 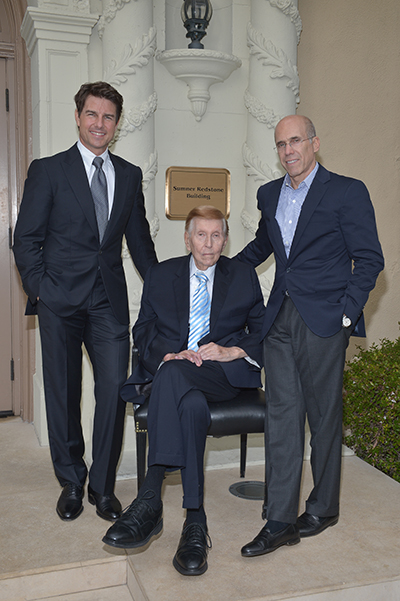 Mr. Redstone’s gift brings the current total of the $350 million MPTF Campaign, launched in February 2012, to just over $300 million. The Campaign was created to build permanent funding for the broad range of social and charitable services that MPTF provides to more than 15,000 entertainment industry workers and their families each year.

“For more than two decades Sumner Redstone has been one of the most generous supporters of MPTF and now with this extraordinary gift to the Campaign, he is providing for future generations in the entertainment community who need the help, support and services of this extraordinary organization. I have admired Sumner as one of our industry’s great entrepreneurs and business leaders as well as philanthropists,” said Jeffrey Katzenberg, Chairman of the MPTF Foundation, “and cannot thank him enough for giving back so generously.”

Mr. Redstone said, “My life’s work has been fueled by my passion for the entertainment industry. At its essence, motion pictures and television programming are wonderfully collaborative enterprises that bring together the talents and skills of many individuals. For me, it is a privilege to help provide essential services for those who truly drive this industry, so they can continue to focus on bringing entertainment magic to so many around the world. I am proud to support the MPTF, a remarkable organization led by some of Hollywood’s leading lights, in its long-term commitment to the film and television community.”

“As we develop our strategic vision for the future, we know that over the next few years there are approximately 75,000 industry workers who will be retiring and many will need our assistance,” said Bob Beitcher, MPTF President and CEO. “MPTF is poised to be the major safety net for our industry thanks to the success of this Campaign.”

Beitcher added that MPTF also helps the young industry worker who hits temporary crisis through a support network of 16 social workers, some of whom are located in each of the MPTF Health Centers located around southern California.

“We want our industry to know MPTF should be the first place they call when they are in need of help,” Beitcher said.

About The Sumner M. Redstone Charitable Foundation
From medical research to education to efforts to aid the poor and impoverished around the world, the Sumner M. Redstone Charitable Foundation seeks to advance aims that align with Sumner Redstone’s lifelong commitment to innovation, empowerment and progress.  Over the last several years, Sumner Redstone has contributed more than $170 million to worthy charities around the world. Recent gifts have funded new state-of-the-art facilities at the USC School of Cinematic Arts and Boston University School of Law, supported the Global Poverty Project towards eradicating polio and established the Cambodian Children’s Fund child rescue center, along with research and patient care advancements in cancer, burn recovery and mental health at several major non-profit healthcare organizations.

The Foundation will continue to seek out and support organizations in the United States and abroad that share Mr. Redstone’s vision for a better world.  For more information on the Sumner M. Redstone Charitable Foundation and Mr. Redstone’s philanthropic efforts, please visit www.sumnermredstonefoundation.org.

About MPTF
For 90 years, MPTF (Motion Picture & Television Fund) has served as a beacon of hope for entertainment industry members in their time of need. As a charitable organization, the MPTF provides financial assistance and services essential to the wellbeing of the community and is a leader in the development and implementation of services and programs for seniors and those who care for them. MPTF is supported by the generosity of corporate donors and fellow entertainment industry members who contribute their time and money because they believe in the critical importance of Hollywood Helping Hollywood. Follow MPTF on Twitter.